Røde Emma – Red Emma – is Jens Bjørneboe’s latest work, possibly the last he wrote at all. The play deals with Emma Goldman and the anarchist movement in the USA in the 1890s. 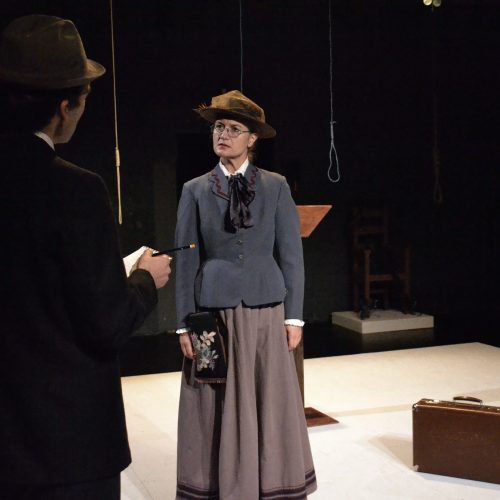 Røde Emma – Red Emma – is the Norwegian writer Jens Bjørneboe’s latest work, possibly the last he wrote at all. The manuscript was handed over to cultural personality Henning Dahl (1952-2008) just before Bjørneboe died with the message that the recipient could use what he wanted. Henning planned a staging at Club 7 in Oslo in 1976, but shelved the project before rehearsals had begun. The manuscript was not allowed to be published by Bjørneboe’s family, but despite the ban, the publisher Bjørnsons Grav had it printed in 1976. Grusomhetens Teater – The Theater of Cruelty – has received the family’s permission for this premiere.

The play deals with Emma Goldman and the anarchist movement in the USA in the 1890s. As in several of Jens Bjørneboe’s works, it is the courage of individuals to challenge an oppressive apparatus of power that is highlighted. Emma Goldmann was monitored, arrested, harassed and imprisoned for her speeches and political involvement. She became a target for actions aimed at free speech staged by US authorities, and arrested more than 40 times.

“Bjørneboe’s acting seems frighteningly relevant, even though it has been in a desk drawer for a lifetime. Hanne Dieserud’s strong grip on the role of Emma Goldmann keeps the play together. ” – Aftenposten

«Dignity and precision rest on the Theatrical Theater’s premiere of Jens Bjørneboe’s Red Emma. It is a pleasure to witness such a precise craft. The physical musical expression is impressive. ” – Shakespeare Magazine